ACHIEVE MY NEW YEAR RESOLUTIONS, ONE RESOLUTION, ONE DAY AT A TIME FOR ONE YEAR.®

I Resolve To® . . . Resolutionista And Seattle Area Multi-Media Artist And Author, Jan Coad, Takes A Look Back At 2009 And A Peek Forward At 2010!

In 2009, I launched an inspirational series of interviews with ordinary folks who do extraordinary things.  They breathe life into their dreams, resolutions and daily goals, one small step at a time, one day at a time over the long haul.  Though they may be statistically in the minority of resolution-makers (the ones who succeed), I wanted to highlight 'what works', and give them credit for their accomplishments.  'Jan Coad was the third 'Resolutionista' inducted into the I Resolve To . . . Hall Of Fame and the inspirational series continues in 2010!

January - MAJOR GOAL for 2009 to become published.  I had participated in writers groups and shared 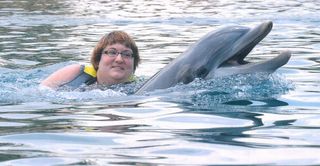 success and rejection.  I made a friend who enjoyed editing as her hobby - she agreed to edit  my book and also shared that her publisher was now open for queries.

February - I queried my editor's publisher = my first publishing contract. ' Why Don't They Come With Directions' will be published in August of 2010.  I also met a friend and we did a tour of New York City and Washington, D.C.

March - I worked on completing my book and on my many art forms (to sell).  I also began planting seedlings indoors for hopes of a garden.

April - Completed my book, sent to editor and began working on IRS 501(c)3 status for my nonprofit, The Lavendar Door Foundation.  Also, one of my contest entries paid off:  I won.

May - One dream came true:  I swam with dolphins in Florida.  I kissed a dolphin and liked it!

June - I began writing my Memoir, DREAM, LAUGH, LIVE, LOVE.  It is my experience being raised without a proper diagnosis of Asperger's Syndrome.  I began another dream, to eat better by growing my own food.  We began enjoying the 'veggies of our labor'.

July - I wrote my lists:  Things I am GREATFUL for and my Dream's List.

August - I began chronicling my garden story and resolved to eat out less and began visiting Farmers Markets.  My new book idea began to form.

September - I put together an outline for my new book idea and completed all the research and photography.  I resolved to do canning and preserve the fresh vegetables and fruits from the Farmers Markets.  I resolved to, and canned, more than 200 dill pickles, six varieties of jams/jellies, syrups, ice cream toppings, peaches, pears, and cinnamon apple sauce.

October - My MAJOR GOAL changed to fighting for my son's rights; he was taken from class, questioned by the Principal and then the Sheriff before we were called.  My mantra was "Sheriffs Police Officers, School Districts, Oh My!"  We wrote a letter to the Superintendant, School Board Members, Principals, School Psychologists, etc.  We also hired an advocate.

November - Still no resolution to the school nightmare, more baby steps:  Fight for home education and tutoring, and a safety plan for when he returns to school.  The MAJOR GOAL through the holidays became 'keeping the peace in the household'.  I resolved to get away:  We spent three nights in Las Vegas and got two more items off my 'Dreams List':  Visit and drive across the Hoover Dam and visit the Grand Canyon.  I received my second publishing contract for a series of books:  Connecting Food, Farm And You:  40 Farmers Markets In 40 Days.

Remember:  I Resolve To . . . Achieve My New Year Resolutions, One Resolution, One Day At A Time For One Year.  It's your choice.  Do it today. Turn your resolution into reality in five simple, common sense steps:  Dare To Dream, Decide, Define, Develop A Plan, and Do It Daily. Make your resolution a permanent Lifetime Resolution, something that's with you for good!  Above all, Be A Resolutionista, someone who makes resolutions, keeps resolutions, and enjoys the journey!  Let's Go For It!

The comments to this entry are closed. 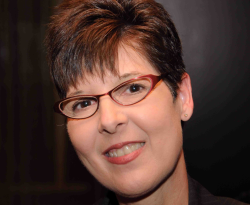 I Resolve To . . . Shop!! Resolutionista Gear

I Resolve To . . . Resolutionista Definition

I Resolve To . . . Resolutionista Resources

I Resolve To . . . Resolutionista Hall Of Fame

I Resolve To . . . Support The Fluffball

I Resolve To . . . Walk For A Breast Cancer Cure